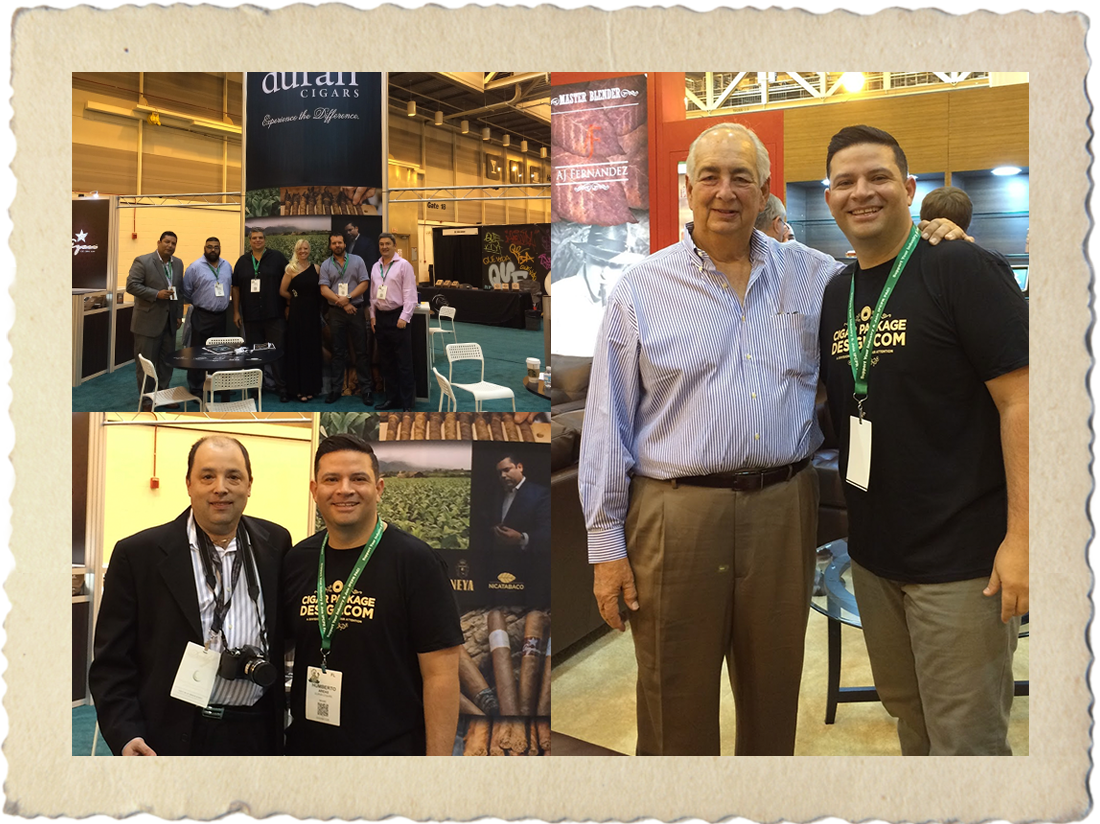 For the fifth consecutive year Cigar Package Design attended the International Premium Cigar & Pipe Retailers (IPCPR) Association Trade Show and Convention. For the past five years we have been committed to supporting our clients on the trade show floor, and this year was no exception. We are proud and fortunate to be working with Duran Cigars, Flor de Gonzalez Cigars and La Rosa de Sandiego Cigars on creative booth visuals, packaging, brand identity, etc. Aside from the work, it’s great seeing friends and colleagues whom we work hard with all year long to make this show happen. The show took place during July 17-21, 2015 at the Ernest N. Morial Convention Center in New Orleans, LA.

After winning the “2014 Best In Show Award for New Exhibitor” for their 20ft by 20ft booth last year, Duran Cigars increased their booth size to a 20ft by 30ft space, allowing us more creative space and freedom. We made layout changes to make better use of the larger space. We created new graphics to showcase new releases. But certainly the highlight of the show was the new branding for Duran Cigars. Although the new name and logo can be seen on new marketing materials, it is the IPCPR Trade Show that marked the big unveiling on the new name. We appreciate the level of confidence Duran Cigars has in us. We have worked hard over the past three years with Roberto Pelayo Duran and will continue to do. Roberto and his staff had their best IPCPR this year, and we have a feeling the best is yet to come.

This year, we’re also thrilled to be working with Yadi Vargas-Gonzalez and the rest of the crew at Flor de Gonzalez Cigars. Before the trade show, Yadi reached out to us with a tight deadline to create a print ad slated for the June/July 2015 issue of Cigar Snob Magazine. With very little materials to work with, we set out to create a company branding/teaser ad. In record time, we created a strong ad which set the stage to mention their “20 Aniversario” release at IPCPR. We then created a 20ft wide by 10ft tall backdrop visual for their booth space. Main graphic featured both the Connecticut and Maduro blends of the new “20 Aniversario” release, while also highlighting the rest of the company’s line extensions. We look forward to the work ahead.

Another IPCPR 2015 project we enjoyed working on was “La Rosa de Sandiego Cigars”. When long time friends, Master Cigar Roller Felipe Sosa and Damian Tapanes called about the project, we jumped in head first. This cigar is being launched by America Caribbean Cigars, out of Esteli, Nicaragua; and is one of those projects where we had the opportunity to created everything from scratch. Logo, cigar band and package design were just some of the items created prior to IPCPR. We are excited to continue the friendship while strengthening the business relationship and respect we have for one another. La Rosa de Sandiego Cigars is now ready to make its presence felt in humidors everywhere.

Every year, more and more people trust us with their projects, and is our goal to deliver quality work every time. In the end, we’re not out to make a quick buck, but rather continue to friendships that will allow both client and CPD to grow. With IPCPR 2015 in the books, we look forward to the next trade show in Las Vegas and the opportunities that lay ahead.