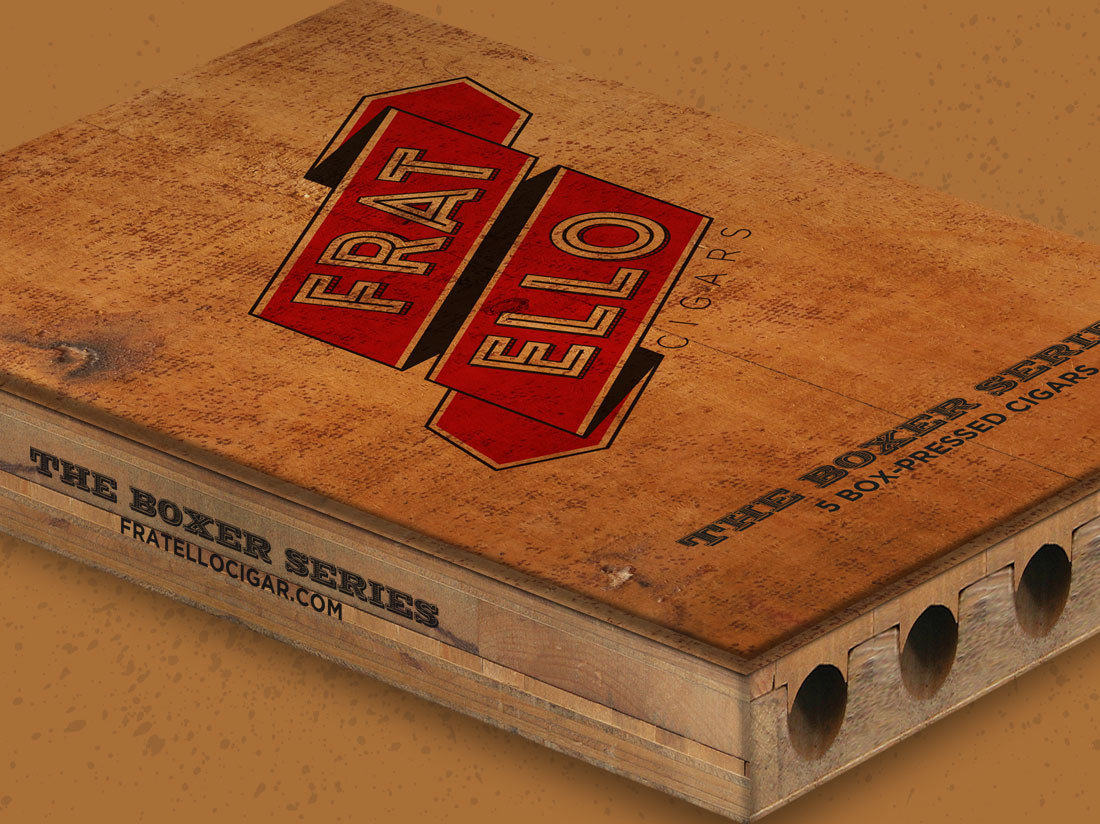 You all heard the news first from @fratellocigars and #CigarInsider. Fratello Cigars is set to launch a limited edition box pressed 5-cigar sampler called #TheBoxerSeries.

Omar de Frias, Chief Cigar Smoker at Fratello Cigars, presented us with a challenge we couldn’t refuse. To create a replica of a traditional cigar mold consumers could take home. He wanted a piece that was both functional and educational, but also appealing for marketing purposes.

The result is a great 5-cigar sampler that resembles a traditional wooden cigar mold, a tool used in the cigar-making process. We created a rustic and authentic look & feel for the limited quantity packaging to add character and personality. The entire crew at Fratello Cigars is eager to start doing in-store events and promotions with the new samplers, which will help to further promote the brand and sales.

—Below is the press release put out by Cigar Insider this past October 20th, 2015—

Fratello Cigars, known for its namesake cigar brand Fratello, is preparing to launch a limited-edition, five-cigar set called The Boxer Series next month. The new brand is an offshoot of the popular Boxer size from the original Fratello line, which brand owner Omar de Frias called “The best-selling vitola we have on the original line.” Though technically part of the original Fratello series, the 6 1/4 inch by 52 ring Boxer size is unique, as it’s box-pressed with a slightly different blend from the core line. Because of its popularity, de Frias turned the single size into an entire brand.

“The 2014 release of the Fratello Boxer was a great success for our company,” de Frias said. “We tweaked the Fratello blend, box-pressed the cigar and people loved it.” The new Boxer Series features the same core tobacco components as the original Fratello line, with slightly tweaked proportions, and consists of a Nicaraguan wrapper, Ecuadoran binder and filler tobacco from Nicaragua and Peru. When Cigar Insider asked de Frias to explain what exactly had been tweaked on the original Fratello blend to create The Boxer, and the new Boxer Series, he responded: “Mostly the ratio of ligero versus the Peruvian tobacco we used.” The Boxer Series will only be available as a five-pack wooden box, which resembles a cigar mold that holds one of each size: The original Boxer, at 6 1/4 by 52; Boxeador, 6 by 54; Boxero, 5 1/2 by 50; Boxista, 5 by 48; and Boxerito, 4 3/4 by 46. Only 3,000 boxes have been produced.

The Boxer Series five-pack will carry a suggested retail price of $45 and is set to debut at W. Curtis Draper Tobacconist in Washington D.C. next month before shipping to retailers nationwide immediately after the event. The cigars are made at the Fábrica de Tabacos Joya de Nicaragua S.A. factory in Estelí, Nicaragua.

Creating the package design for #TheBoxerSeries and working with Omar de Frias, Fratello Cigars President, has truly been an honor for us. We at #CigarPackageDesign look forward to collaborating on future projects with the great folks @fratellocigars.