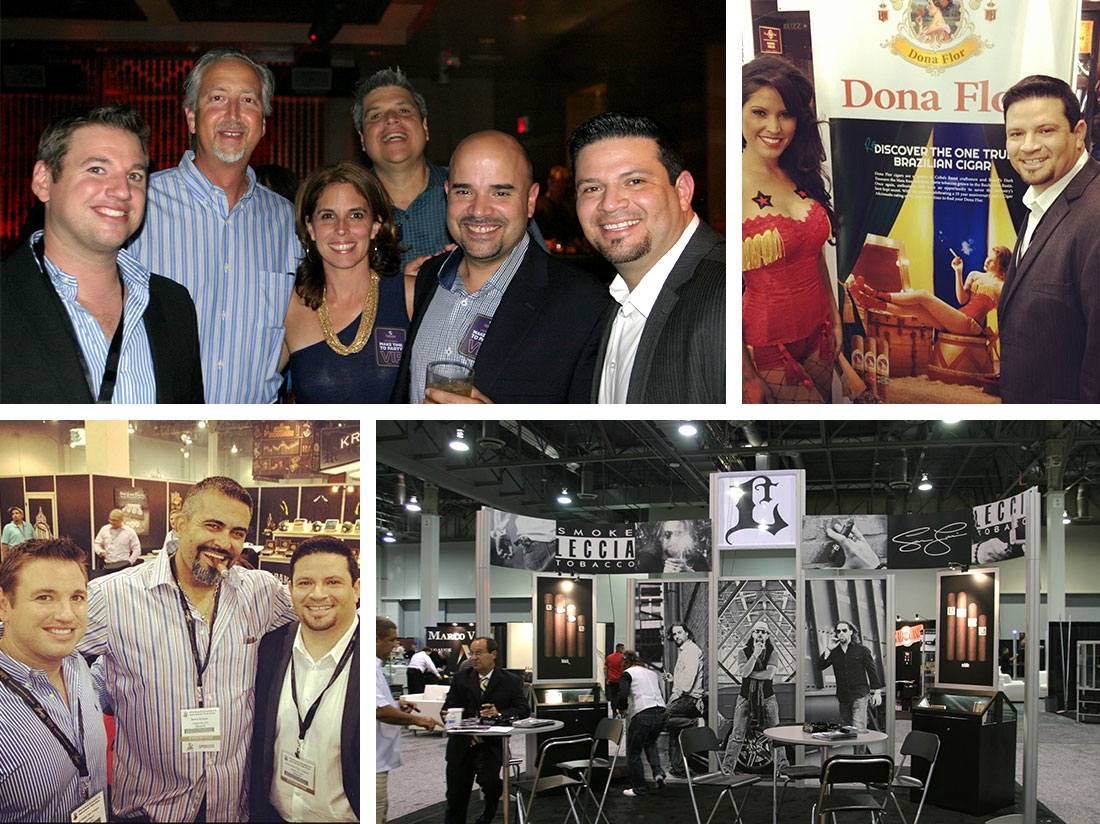 The 81st annual IPCPR Convention & Trade Show will take place July 13-17, 2013 at the Sands Expo Center in Las Vegas, Nv. and we at Cigar Package Design are celebrating our fourth year of participation of the trade show. This year we continue to work with Torano Family Cigar Co. as we help them launch two new cigars lines; and we welcome to our family Leccia Tobacco and Roberto Duran Cigars.

Torano Family Cigar Co. Booth Design & Layout
Since 2010 the Torano Family Cigar Co. IPCPR booth has gotten bigger in square footage every year. This year we’re adding extra real estate to accommodate Leccia Tobacco and Palio lighter and cutters into the booth layout. But our goal remains the same, which is to create a design and layout that highlight’s the Torano family’s four generations of cigar manufacturing, while providing a separate branded space for Leccia Tobacco and Palio. We implemented branded towers (which serve as storage) and branded signage up above and all around the booth. The massive 20ft x 80ft booth had a foot traffic friendly open layout, plenty of couches for sitting and table top work stations where sales reps can have meeting and take orders.

Torano Exodus 1959 Finite 2013 Launch
Finite, a term developed by the Toraño family, will classify all future limited production blends for the company. For this project, we drew inspiration from the existing Torano Exodus 1959 trilogy of the Silver, Gold and 50 Years’ design characteristics. Our goal was to reinterpret the brand’s strong positioning while updating the packaging with a more courageous color palette. We created a distinctive icon which will be the main identity for future limited production releases.

Torano Vault D-042 Launch
Torano’s Vault Red (D-042) is the second release under the “Blends from the Vault” series. Our challenge with this project was to preserve the brand’s strong branding, while creating a contrasting difference between the original Vault Black (A-008). We created a more dynamic and vibrant color palette which combines powder metallic inks, embossing, spot UV and compliments the “Blends from the Vault” series. Both primary band and cigar box packaging remained the same from the Vault A-008 release, only the footer bands with blend identifier changed.

Leccia Tobacco Booth Design & Layout
Same Leccia has returned to the IPCPR trade show floor under the Leccia Tobacco name. We met Sam when he came to terms with Torano Family Cigar Co. for product distribution. Leccia was so impressed with what we had created for the past three years for the Torano’s that he insisted we work on his IPCPR trade show booth design. Leccia’s two initial launch brands under Leccia Tobacco were the ‘Leccia Black’ and ‘Leccia White’ – so we took the Black & White theme and branded his booth with black and white lifestyle photography.

Azan/Duran Cigars Booth Design & Layout
The re-launch of an old Cuban cigar. Today, Roberto Pelayo Duran of Roberto Duran Premium Cigars, is bringing back the Azan Cigars name and aims to offer the same quality, construction and detail which he exceeded from those he supervised while in Cuba. After meeting with Roberto and understanding how he wanted the brand positioned, we (CPD) went to work on design and layout for Azan’s booth. We pulled colors from existing packaging, elements from printed collateral and logos to create a rich and bold booth space which reinforced the brand highlighted product.

Our philosophy at Cigar Package Design is work hard and smart, play nice and make our clients look good. It’s as simple as ‘You Make Cigars, We Design’ – so give us a shout and lets collaborate on something great.